The deer is not crossing the road… 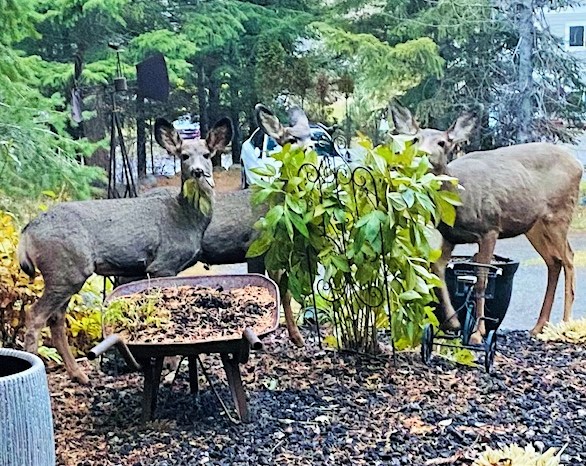 …the road is crossing the forest.

Guests are frequently thrilled to see deer that are not at all fearful in our yard. Often, the deer will watch from 20 feet away as they offload their luggage, or sip wine on the patio, and as much as I love these wild neighbors of ours there are times when I have threatened, loudly, to build a fence…a high fence. Deer graze, all day, every day, and they lack the decorum to recognize the difference between what I deem allowable fodder and my beloved flower garden. I discovered this fact when I pulled into our driveway shortly after planting some plants in our newly landscaped front entrance, to find two deer thoroughly enjoying my newly planted plants in a way I had not even considered. This was my first ‘run in’ with a deer’s nature, and was surprised to find that it wasn’t until my charging body was within 10 feet that they felt threatened enough to sprint. They bounded 20 feet, stopped, and turned to look at me as though I was the one who had lost her mind. Let the research begin. ‘Plant plants that are deer resistent’, the problem with this approach is that the plant is half eaten by the time the deer realizes that she doesn’t care for it and moves on to something more palatable. ‘Spray plant with awful tasting spray’, see above, I have even tried cayenne pepper and then entertained the thought that perhaps our deer were of mexican ancestry…ole! ‘Scare them away’, hmmm, maybe we’re on to something here. Enter the motion detector sprinkler. What a wonderfully glorious invention that I am forever indebted to it’s creator for. Stake sprinkler in ground, turn sensor in the appropriate direction and wait. The click the sprinkler makes as it senses movement and is about to begin drenching the offender is enough to scare them the seemingly instinctual 20 feet away before turning to see what happened. I wonder if they wonder where the crazy person with the flailing arms is, but apparently they are not curious, or hungry enough to risk coming back. Mission accomplished.

Then there was the day that I opened the front door and felt my heart jump out of my chest. As I was being peppered by flying gravel, I watched a full grown doe bolt from her cozy cool daybed against said door, nearly as panicked as I was, run the appropriate 20 feet, then stop and glare at me with tongue wagging, I resisted the urge to do the same. How had she gotten through the, by now, two sprinklers? My mind went back to the Oceans Twelve laser dance, but no, she couldn’t possibly be that smart or agile. I was relieved to find that she hadn’t nibbled on a single thing on her way to a nap, this will forever be remembered as my lucky day!

There is a hill that runs up the side of our house that we had landscaped with lava rock making it difficult for us to get up and down, never mind deer who like to have their feet on solid ground. This route is a well used short cut of sorts to our back door and Dennis decided to make it safer for us by installing stairs. The project was completed and looked great in a single day and I was mightily impressed by his carpenting ability once again. The next day as I was shaking out some rugs at the front door, I looked up to admire the newly stained stairs and noticed that a couple of bushes near the bottom of the stairs had been nibbled on. I wondered how or what had done this, that area of the garden had never been abused before?! The stairs. The damned stairs. The damned deer like the damned stairs too!! The next morning as I was leaving the house I admired the lovely gate at the top of the damned stairs. Mission accomplished…again.

It’s been almost seven years, and I have resided myself to knowing that my relationship with deer will always be one of extremely conflicting emotions. Having said that I am beyond happy when guests are enamoured with their presence and seemingly cavalier attitude, while I wonder what wicked plan they are scheming to stealthily prune my peonies…